Welcome to part six of Rear View Print’s Ultimate Track Guide. We’re especially excited for this one, with Suzuka Circuit being one of the team’s favourite tracks of all time. Before you dive in, prime yourself with our fantastic infographic below. 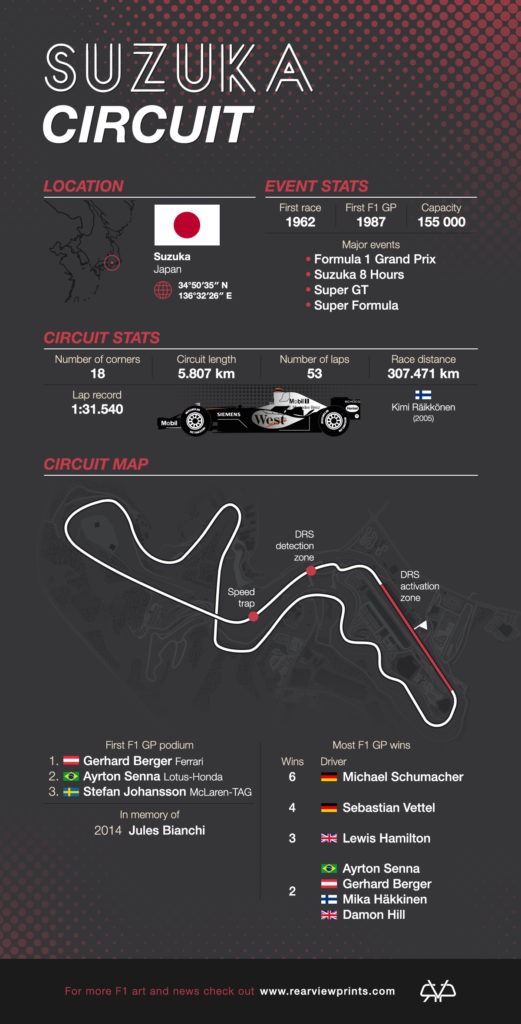 Introduction to the Suzuka Circuit

The Suzuka Circuit is home to a number of motorsport events, including the Japanese Grand Prix, Suzuka 8 Hours (Motorcycle Endurance) and the WTCC (World Touring Car Championship). It’s owned by automobile giant Honda and was first operational as a test track for the car company in 1962. It’s one of few circuits in the world to have a figure 8 layout, making it a unique prospect for F1 drivers and one of the more popular tracks in the sport. 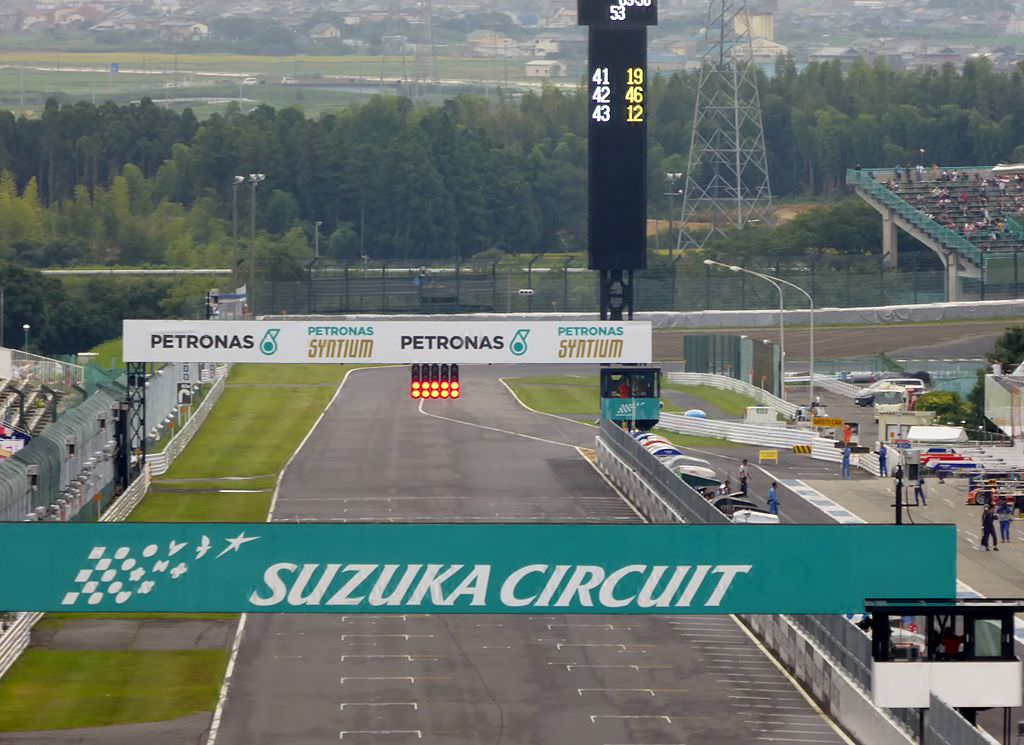 History of the Suzuka Circuit

In its history, the circuit has been modified a total of 4 times. Its last modification came in 2003 after the tragic death of Daijiro Kato, in which Suzuka added a second chicane between the hairpin and the 200R in the motorcycle variant.

Suzuka hosted its first F1 race in 1987, with the winning podium being made up of Gerhard Berger, Ayrton Senna and Stefan Johansson. It was dropped in 2007 and 2008 in favour of the Fuji Speedway, which had undergone major renovations. However, Fuji announced in 2009 they were no longer going to take part in the F1 Calender, leaving Suzuka to retake its rightful place as home of the Japanese GP. It was closed for a short time to make itself F1 compliant during 2009, holding a re-opening day on April 12th. 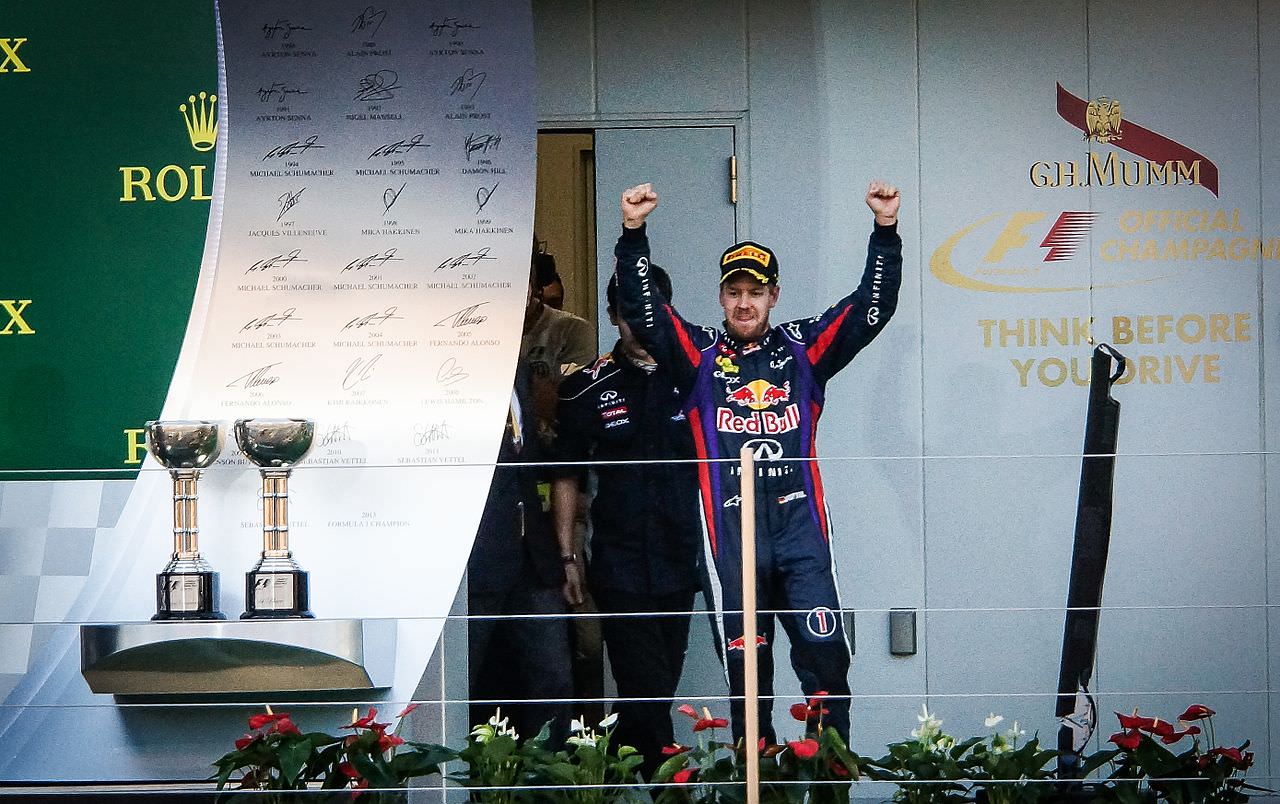 Most successful drivers on the Suzuka Circuit

Like many other of our track guides at Rear View Prints, Michael Schumacher once again claims the top spot as driver with the best record. The Red Baron had a great relationship with the circuit. It was at Suzuka in 2003 where he claimed just the one point he needed to gain 6th a drivers title, leaving Juan Manuel Fangio’s previous record of 5 in the dust.

Following close behind is fellow countryman Sebastian Vettel. The german racked up 4 wins total at Suzuka, perhaps the most special coming in 2010 where he became the youngest driver to win twice at the same circuit at the age of 23 years and 98 days.

Rounding up the list is the Billion Dollar Man himself, Lewis Hamilton. In truth, the British champion is still building his relationship with the circuit; with one of his more memorable moments coming only last year where he claimed his first Suzuka pole and smashed Michael Schumacher’s qualifying lap record in the process. Clocking in at 1:27.319 it was an entire 15 seconds faster than the Red Baron’s time. 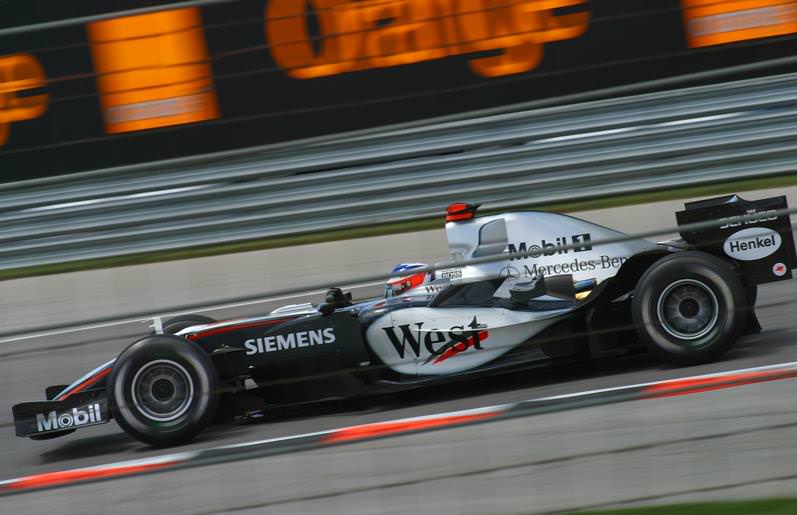 Widely regarded as one of the best F1 Grand Prix’s in history, the 2005 Japanese GP featured perhaps Kimi Räikkönen’s finest moment of his career. Coming from all the way back from 17th in the grid, The Ice Man drove an exceptional race which resulted in him overtaking leader Giancarlo Fisichella on the final lap. It was a riveting moment in motorsport history and perhaps the most exciting race at the Suzuka Circuit to date.

Senna and Prost had a few notable appearances at Suzuka, as we’ll mention again in this section. It was the 1988 Japanese Grand Prix however that showcased why Ayrton Senna is considered one of the greatest drivers of all time. Having stalled on the line, the race was an unexpected uphill battle from the start. He managed to finish the first lap in 8th, and eventually on the 28th lap he overtook The Professor to take the lead and the title.

An eventful race for a few different reasons. Senna and Prost’s sensational rivalry on the circuit continued with an infamous early crash which resulted in both of them retiring early. There had been a pre-race dispute in which Senna had complained about the side of the track pole was positioned on. He had warned that if Prost was given an advantage on the first turn he would attempt to overtake him no matter the consequences. True to his word both cars ended up out of the race as he bulldozed his way into the frenchman with little regard for him or his competitor. Despite this drama, elsewhere in the race saw Aguri Suzuki secure the country’s first podium finishing in third place. Although he never became a top driver in F1, this historic finish ensured legend status in his own country.

Fernando Alonso: ‘I wish. Which tyres do we push on?’

– Fernando displaying his famous sarcastic wit back at the 2016 Japanese Grand Prix.

Suzuka is definitely a circuit that puts hair on your chest. It’s extremely uncompromising; like a street circuit, it doesn’t allow for a single mistake, punishing you for putting a wheel wrong at almost every point on the circuit.

– Jenson Button reflects on the difficulty of one of his favourite circuits of all time.

When I first raced here in 2009, I couldn’t believe a place like this could still exist in Formula 1 – it still feels like a proper old-school circuit. It doesn’t have the polish or finesse of an ultra-modern track – but is all the better for it. It’s fantastically quick, too, and very difficult to master. It’s an unforgiving place, and it also has that special atmosphere that you only get in Japan, for some reason.

– Lewis Hamilton speaks fondly about his time at Suzuka. 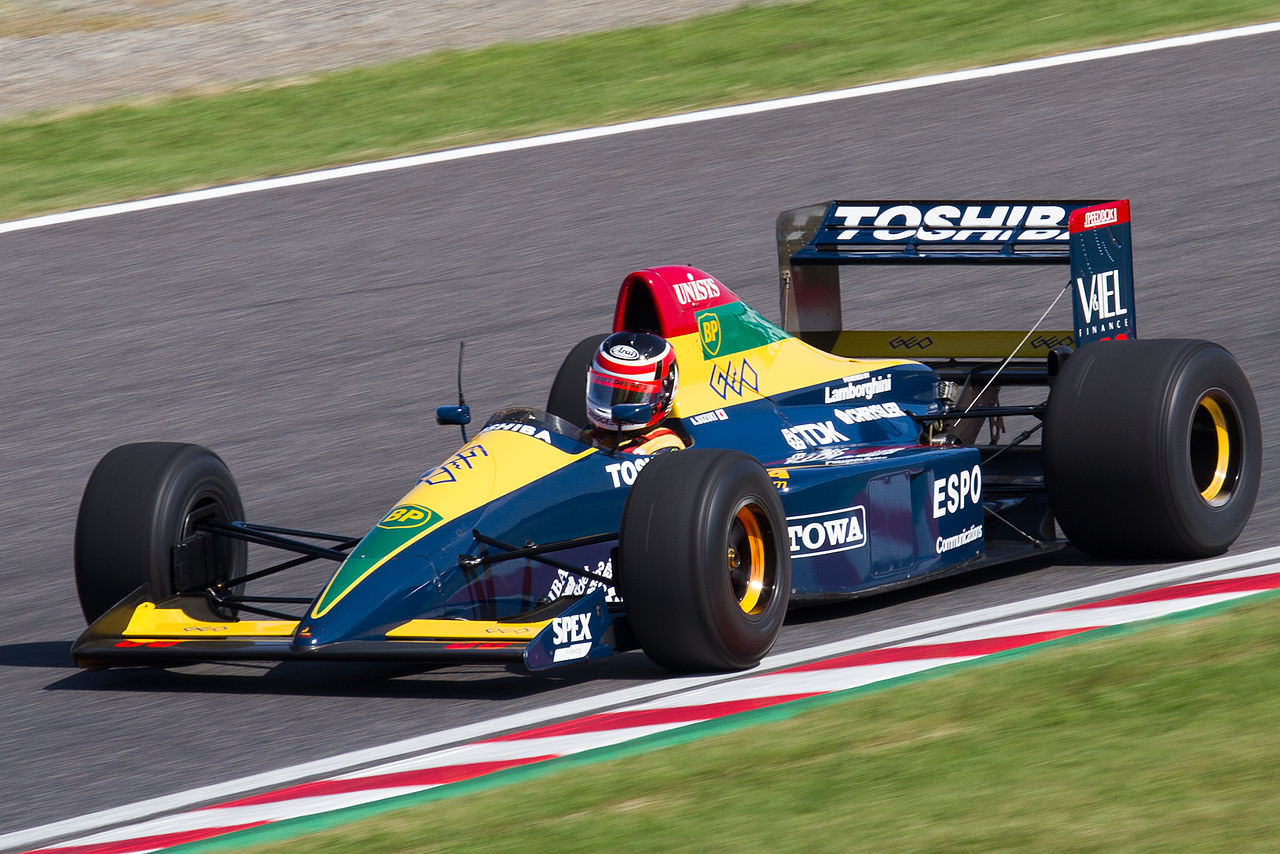 Due to the usual late positioning of the Japanese Grand Prix in the race calendar, the world championship has been clinched more times in Japan than in any other country. 13 total champions have been crowned in Japan over the years.

Austrian legend Gerhard Berger has recorded the smallest ever margin of victory in Formula One history back in the 1991 Japanese Grand Prix. Due to a pre-race agreement, Senna allowed his McLaren team mate to take victory by just 0.344s.

At the 1993 Japanese Grand Prix Ayrton Senna famously threw a punch at Jordan rookie Eddie Irvine, for in his view “unprofessional” racing. Even though the Brazilian had just triumphed at Suzuka, Senna was almost entirely focused on tracking Irvine down and fiercely criticising him for what was in truth, a very minor racing incident. Irvine had unlapped himself from Senna twice in the race prior for which he would make no apologies for. Senna burst in on Irvine and asked him immediately “What the **** do you think you were doing?” to which the bemused Northern Irish rookie replied “I was racing”. Needless to say, the argument escalated and resulted in Senna throwing a punch, which depending on who you asked, knocked Irvine down or barely connected. Either way, days later Senna was handed a suspended two race ban by the FIA.

Despite the home track advantage, only two Japanese drivers have ever managed a podium finish at Suzuka. Aguri Suzuki in 1990 and Kobayashi in 2012.

Michael Schumacher and Sebastian Vettel have never won from outside the front row.

The Degner curve was named after German professional Grand Prix motorcycle racer Ernst Degner, after he crashed his factory Suzuki 50 at Suzuka’s inaugural All Japan Championship Road Race meeting. He suffered extensive burns which require over 50 skin grafts. He eventually recovered and returned to race for Suzuki again in 1964.

We hope you’ve enjoyed the latest iteration of our track guide series, we’ve got one track left before we call it quits this season, so make sure you keep us bookmarked. Is there any particular track we haven’t done you’d like to see in this series? Let us know and we’ll see what we can do about it on twitter, facebook or instagram. Don’t forget, if you’re a big fan of Suzuka we stock an exclusive print that is pretty much a must for all big F1 fans right here. Until next time folks.

If you’re still not satisfied and are thirsting for more car content, check out how you can get 12 TOTALLY FREE wallpapers for your phone, tablet, desktop, laptop or whatever gadget you desire! Available below right now!