Welcome back everyone to what is likely to be our last track guide of the season. If there is any interest in seeing any more of these guides for any tracks we haven’t done, please let us know, but for now this series will be coming to a close with the mighty Circuit of the Americas. As always, dive into our infographic below before reading the rest of the blog, and make sure you share it around too! 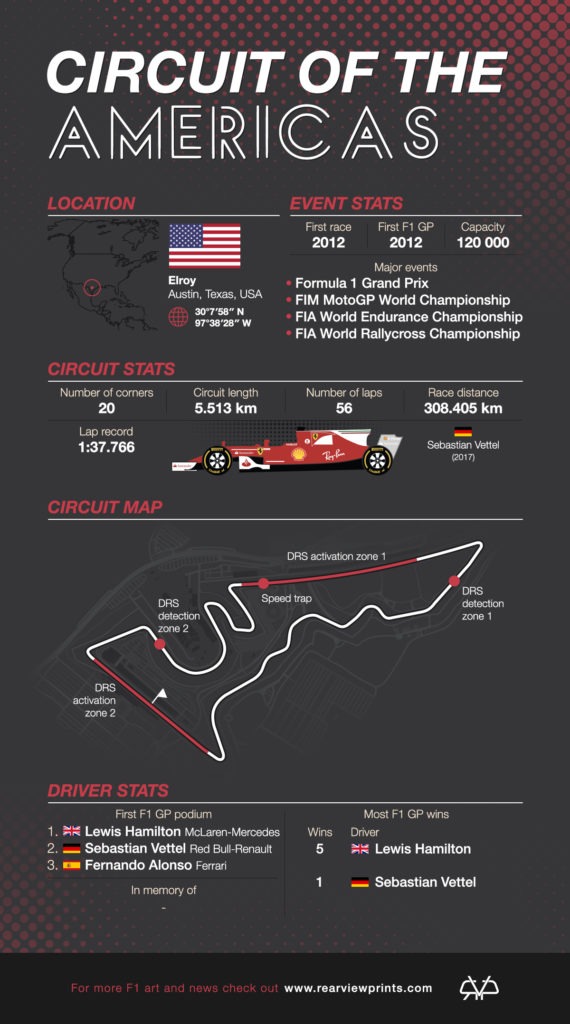 Introduction to the Circuit of the Americas

Circuit of the Americas is by far and away the youngest track in our guide series, but due to its popularity we just couldn’t resist giving it a write up. The track is the first and only purpose built circuit for F1 racing in America and is home to the United States Grand Prix. Circuit designer Hermann Tilke was lead architect on the project, who also assisted on tracks such as Shanghai, Yas Marina and Bahrain. Despite being purpose built for F1 racing, the track also hosts the FIM MotoGP World Championship and the FIA World Rallycross Championship. It’s also due to feature in the IndyCar series from 2019. A crowd of 117,429 turned out in November 2012 for the track’s debut, in which Lewis Hamilton came first from Sebastian Vettel and Fernando Alonso respectively. The design philosophy of the Circuit of the Americas was to increase overtaking opportunities, which came via a deliberate widening of the corners. Aesthetically the circuit is crowned by the 251-foot COTA (Circuit of the Americas) Tower, which sits overlooking the track. 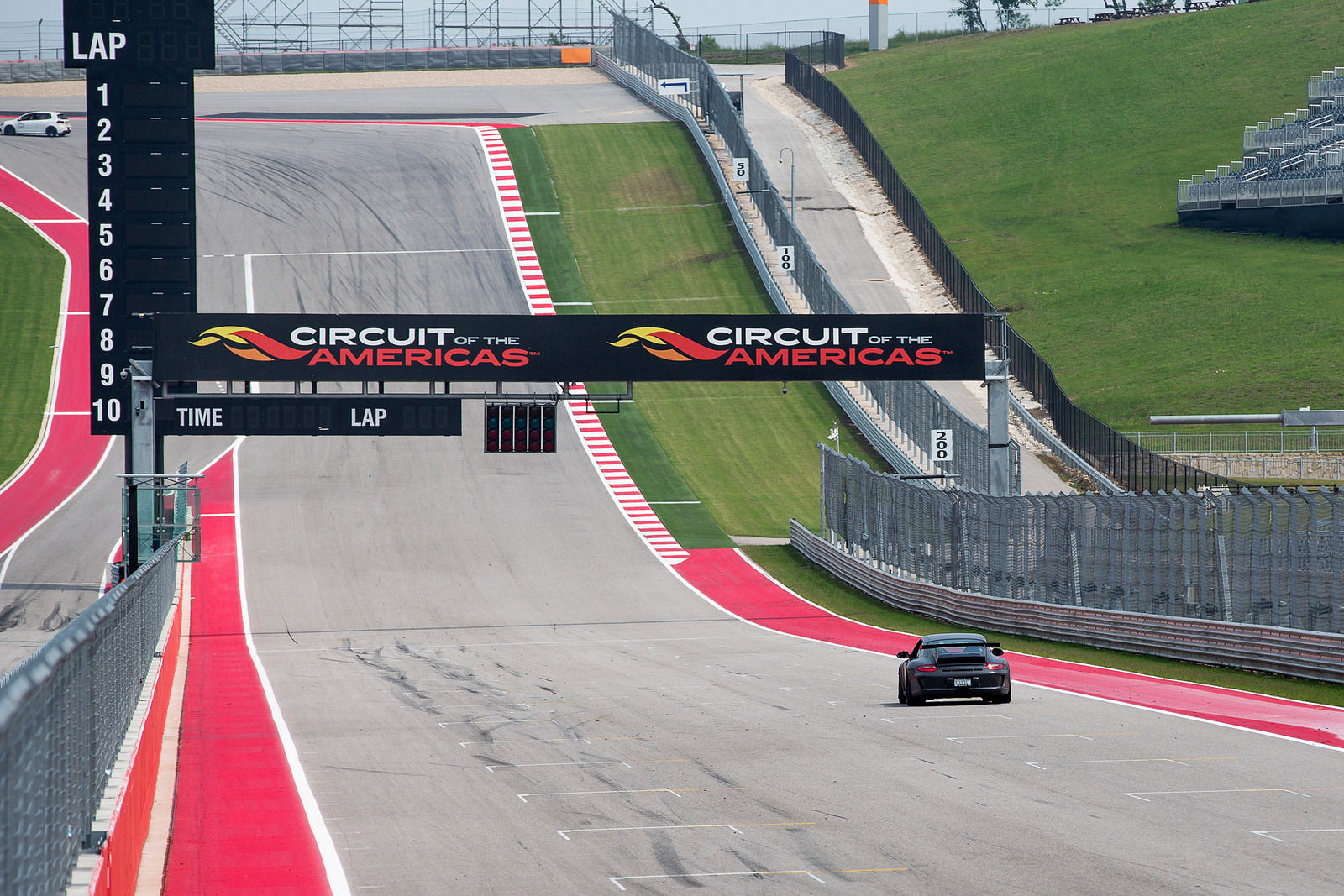 Circuit of the Americas’ Most Successful Drivers 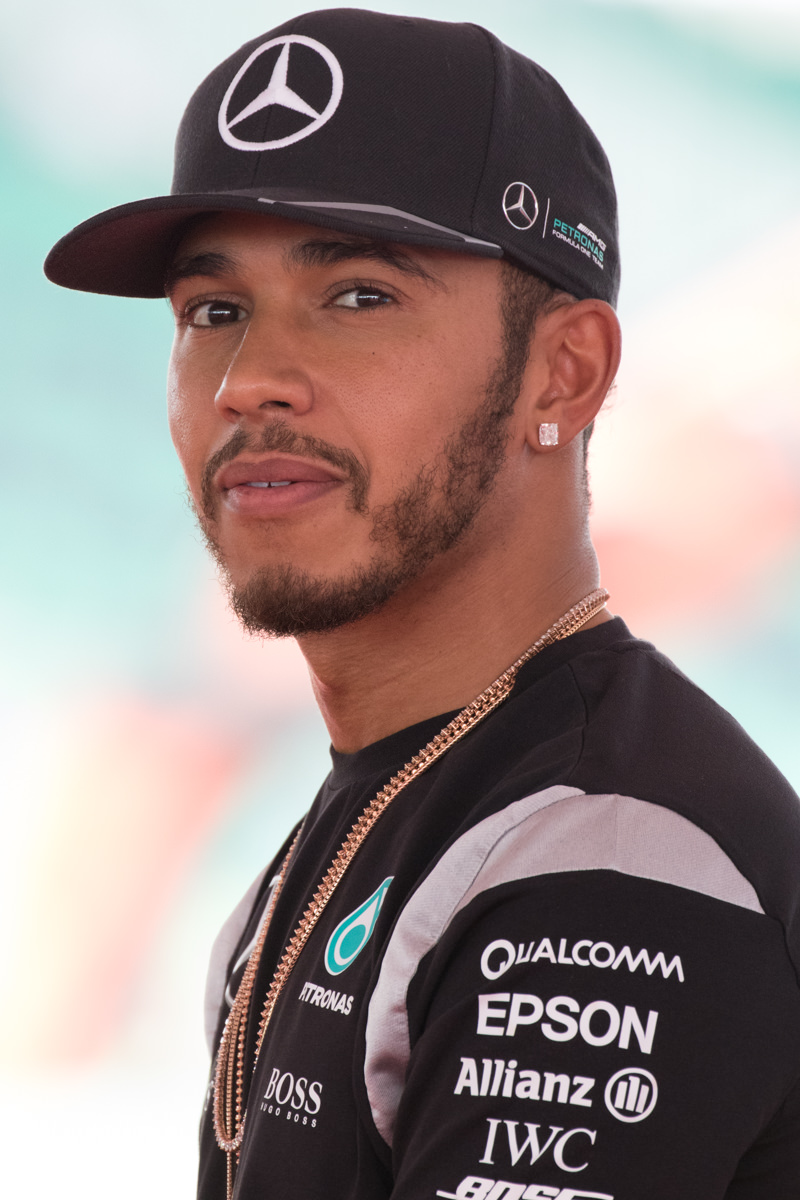 Usually we have around three or so drivers on this list, but with Circuit of the Americas infancy only one driver has been given the chance to dominate. No prizes for guessing who. It’s of course Lewis Hamilton who has been a dominant force in modern Formula 1 racing overall. Many notable moments materialised for Hamilton at Circuit of the Americas, including his final win for McLaren in 2012, recording his thirty-second career victory in 2014 and becoming officially the most successful British driver in Formula 1 history, and equalling Ayrton Senna’s title count in 2015 with his 3rd championship.

Circuit of the Americas’ Most Famous Races

Torrential rain and adverse weather conditions meant that qualifying was delayed multiple times, setting the tone for a tricky and memorable race in which only 12 drivers finished. Due to damp starting conditions, Red Bull drivers Kvyat and Ricciardo formulated an early challenge for the lead, before dropping back when the track dried up. Hamilton eventually finished 1st and took his 3rd championship title, matching his idol Ayrton Senna in the process.

You’re likely beginning to notice a distinct flavour to this write-up of Circuit of the Americas. Yes, it’s another outing dominated by British legend Lewis Hamilton. This race becoming notable for recording his thirty-second career victory and becoming the most successful British driver ever in the process. Elsewhere in the race Ricciardo’s third place finish saw him officially out of the running for the title while pole-sitter Nico Rosberg came in second after being overtaken by Mercedes teammate Lewis Hamilton on lap 24. 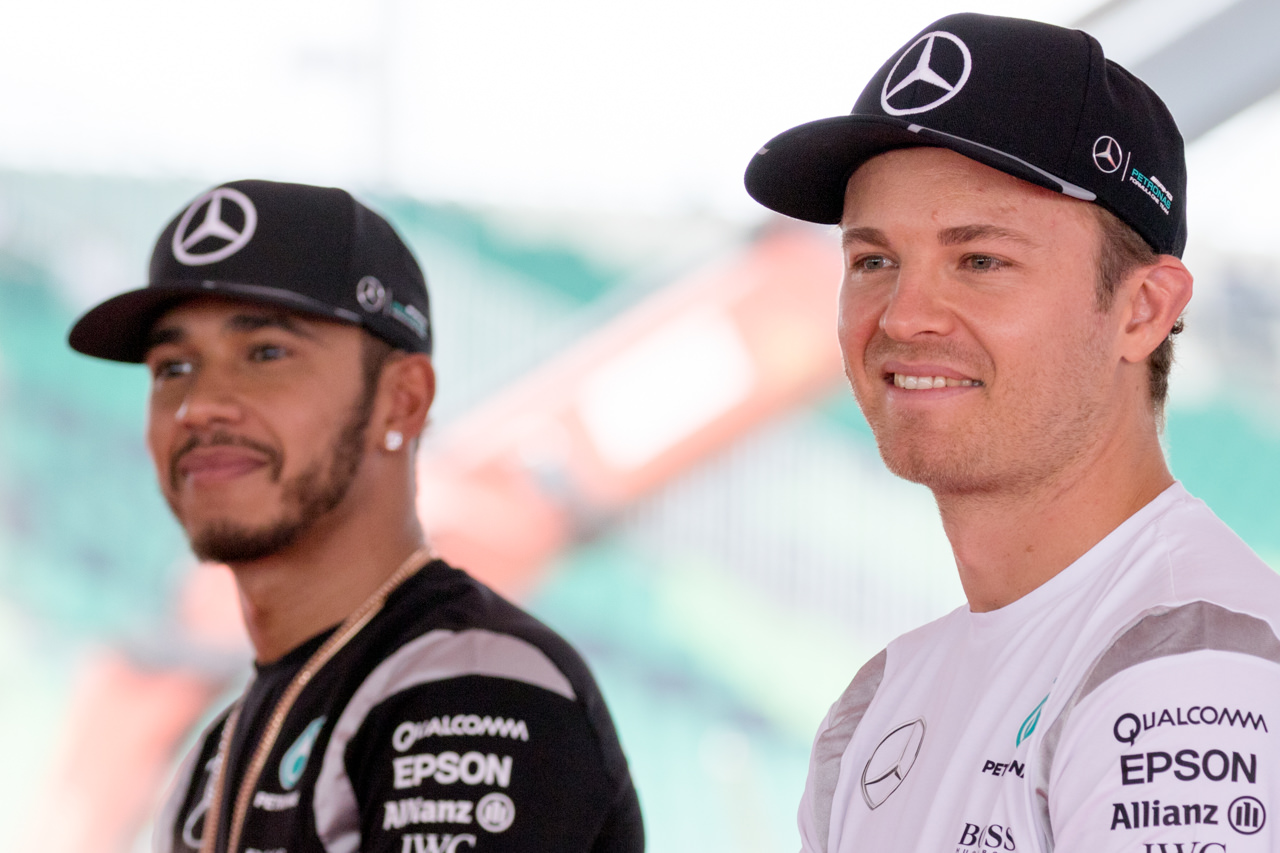 Circuit of the Americas Choice Quotes

“The track seems spectacular, very, very nice. It will be challenging for us drivers and engineers as well. “I think will be a good show for everybody and hopefully some good overtaking as well, opportunities around the track. So it can be a very good weekend.” – Fernando Alonso has nothing but praise for what was then a brand new track, Circuit of the Americas in 2012.

“Not walking. If I find golf cart or something…” – The ever honest Kimi Räikkönen rebuts the prospect of walking the Circuit of the Americas pre-race.

“Just our typical games.” – Nico Rosberg explains the infamous cap throwing scenario at the 2015 US GP. He was pictured in the cool down room visibly angry and throwing his podium cap back at Hamilton after he passed it to him.

“There is no need. Everyone has a right to an opinion but it doesn’t matter. I won the race.” – A dismissive Lewis Hamilton rubbishes the prospect of talking about an early race maneuver in the 2015 United States GP that teammate Rosberg described as “aggressive”.

“A very humbling experience” – Lewis Hamilton describes how he felt matching his idol’s world championship record of three at the Circuit of the Americas in 2015. 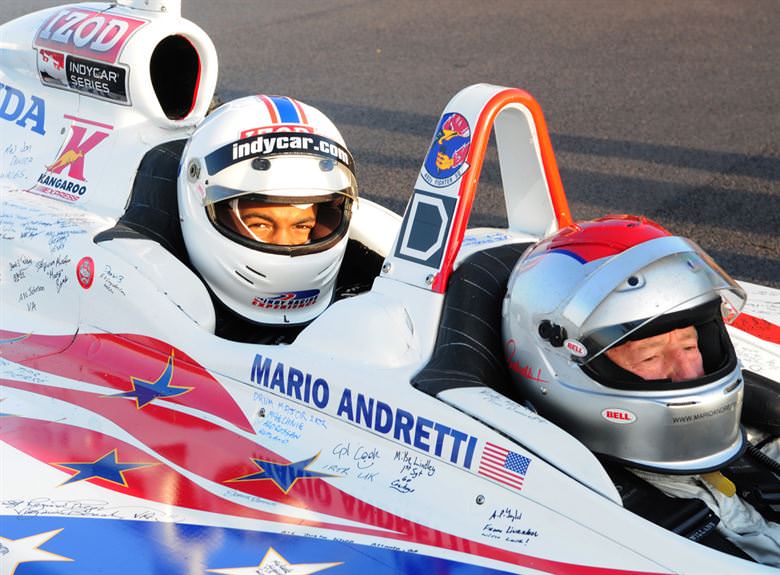 Circuit of the Americas Trivia

A three hour race at Circuit of the Americas racks up around 200m in commercial revenue.

The track officially opened on October 21st 2012, where Mario Andretti drove the ceremonial first laps in a Lotus 79. This was the same car he drove when he became the last American to win the World Drivers’ Championship, all the way back in 1978.

In 2015, Alexander Rossi became the first American to race at the Circuit of the Americas in official F1 competition.

Circuit of the Americas is one of only a limited number of tracks to run anti-clockwise in the F1 calendar, the others being Marina Bay, Korea International Circuit, Yas Marina and Interlagos.

We hope you enjoyed what is likely to be our final track guide of the season, but hope you’ll stick with us for more F1 and motorsport features to come. If you have any questions or comments you can reach us on twitter, facebook or instagram. You should give us a follow on all three as we update daily and often post some great artwork for you to look at. If you’re as big of a fan of the Circuit of the Americas as we are, check out our exclusive print we stock of the circuit over at our store. Lovely stuff, eh? Until next time.

If you’re still not satisfied and are thirsting for more car content, check out how you can get 12 TOTALLY FREE wallpapers for your phone, tablet, desktop, laptop or whatever gadget you desire! Available below right now!