Part five of Rear View Print’s Ultimate Track Guide is upon us, and it’s time to examine one of our most requested tracks, the home of the Belgian Grand Prix; the mighty Circuit de Spa-Francorchamps. Check out our tasty infographic below to get a good overview before diving into our analysis. 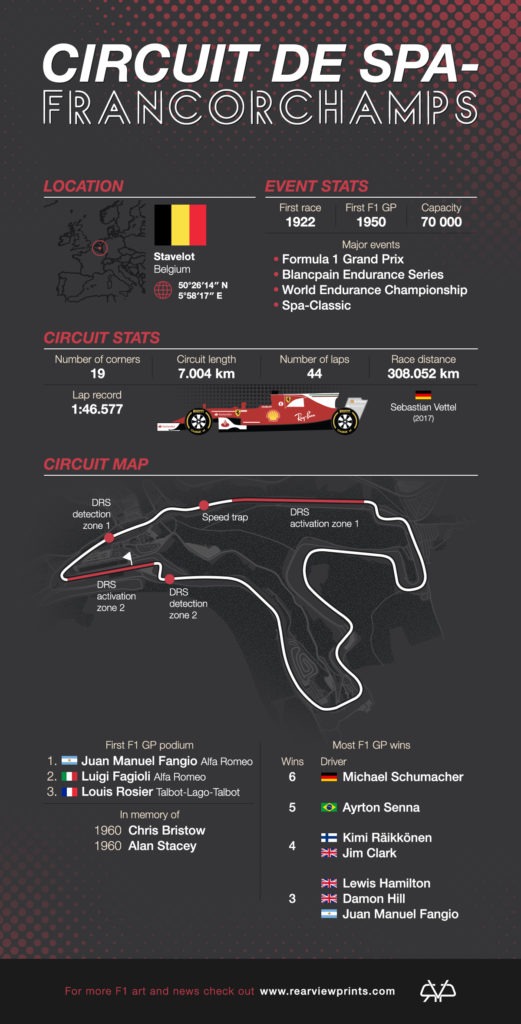 Like other tracks we have analysed here at Rear View Prints, the Circuit de Spa-Francorchamps is not just famous for F1 racing. It’s also home to endurance heavyweights Spa-24, inspired by Le Mans, as well as 6 Hours of Spa-Francorchamps. The circuit itself has a tremendous reputation amongst drivers, fans and analysts alike. This is largely due to its combination of speed and extraordinary turns. Featuring historical highlights such as the Masta Kink, which according to Jackie Stewart was “the most difficult corner in the world” as well as the staple Eau Rouge / Raidillon combination. Fernando Alonso explains the legend of Eau Rouge below.

“You come into the corner downhill, have a sudden change [of direction] at the bottom and then go very steep uphill. From the cockpit, you cannot see the exit and as you come over the crest, you don’t know where you will land. It is a crucial corner for the timed lap, and also in the race, because you have a long uphill straight afterwards where you can lose a lot of time if you make a mistake. But it is also an important corner for the driver’s feeling. It makes a special impression every lap, because you also have a compression in your body as you go through the bottom of the corner. It is very strange – but good fun as well.” 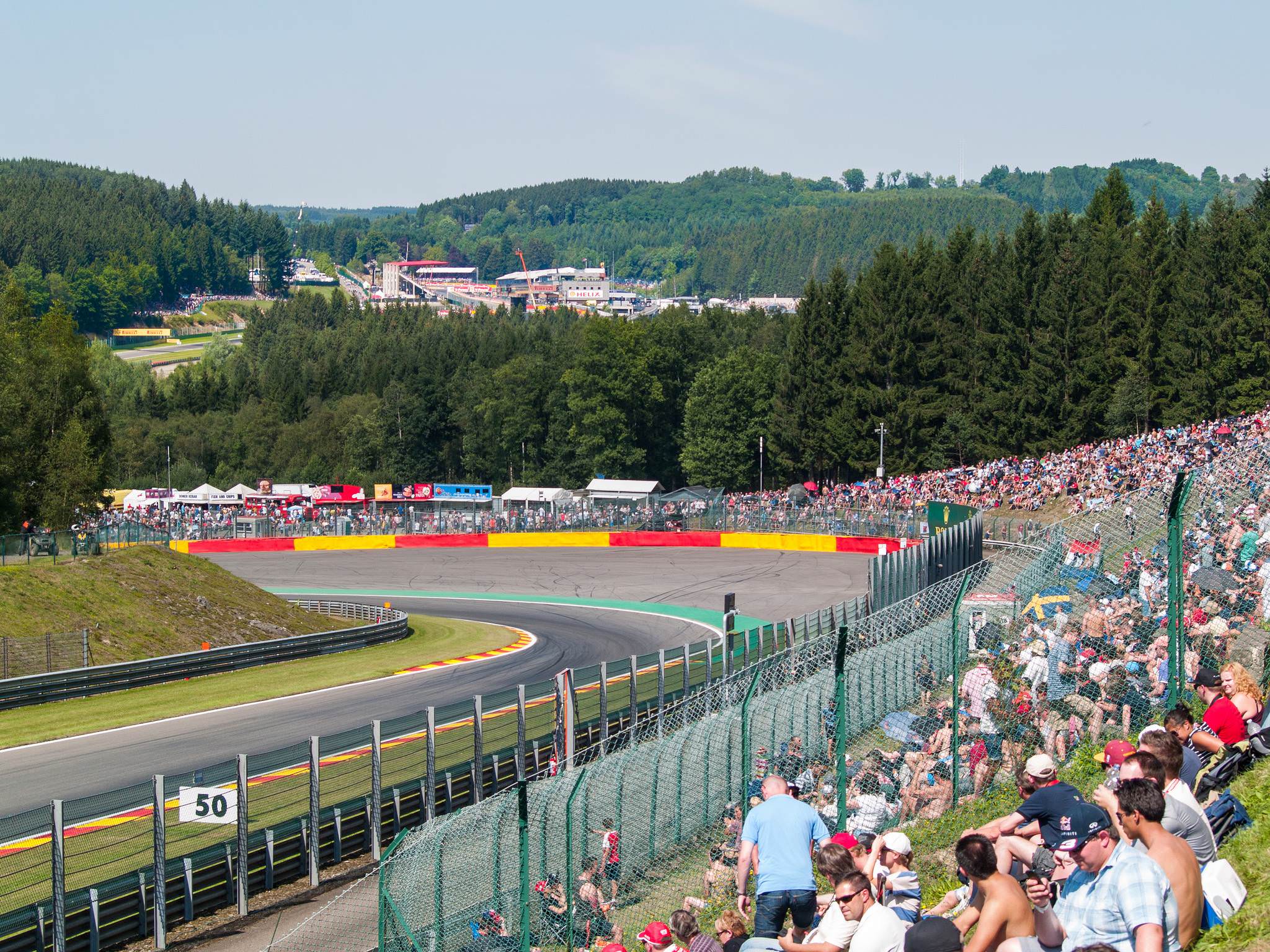 The Circuit de Spa-Francorchamps has a long and rich history in motorsport, making its debut for Grand Prix racing in 1925. Due to its unique design, the track has been modified hugely over the years to accommodate better safety for drivers. During the 1950s in particular after the introduction of the Formula One World Championship, the track had an extremely fearsome reputation. This was owed to the fact that all slow corners had been taken out, leaving only La Source as the only one not considered ultra high speed. As history marched on, the track became shortened and safer over the years due to fears for driver’s welfare. Jackie Stewart led a safety crusade that saw iconic circuit sections like the Masta Kink removed. He also tried to lead a boycott of the Spa 1000km race in 1972, but was shut down by drivers outside of F1 who were still fond of the divisive track. Today, although the Circuit de Spa-Francorchamps is much safer, it still keeps its reputation as one of the most exciting venues on the F1 calender. This year it was announced that turn 11 on the track will be renamed Jacky Ickx, in memory of Belgium’s greatest ever driver. 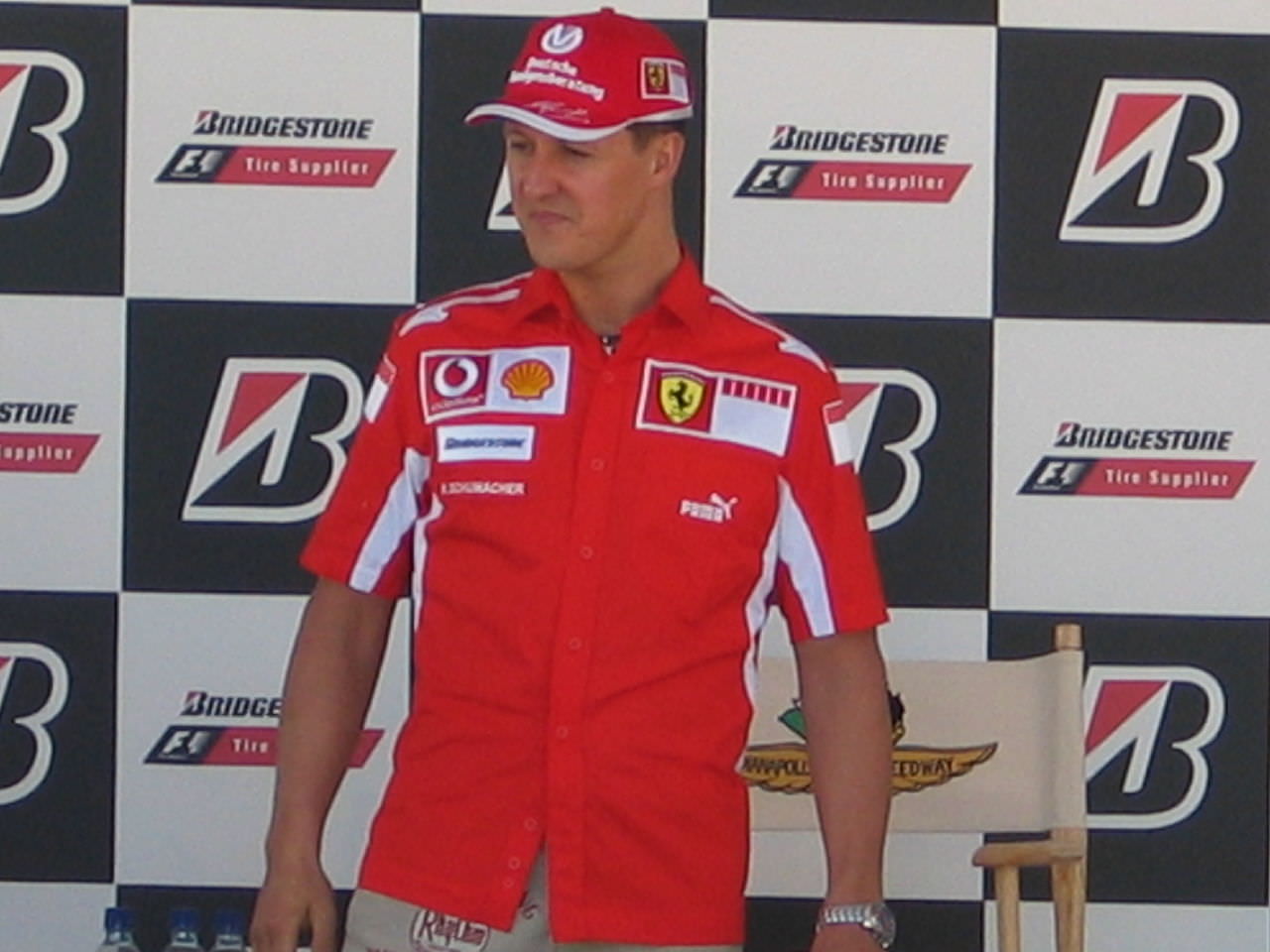 Schumacher claimed his first GP race victory at the Circuit de Spa-Francorchamps in 1992. It was the beginning of a beautiful relationship between The Red Baron and what is often referred to as the “ultimate driver’s track”. Such was the German’s association with the circuit and the Belgian Grand Prix, his son Mick marked the 25th anniversary of his father’s first ever win by driving demonstration laps before the main event last year in 2017. 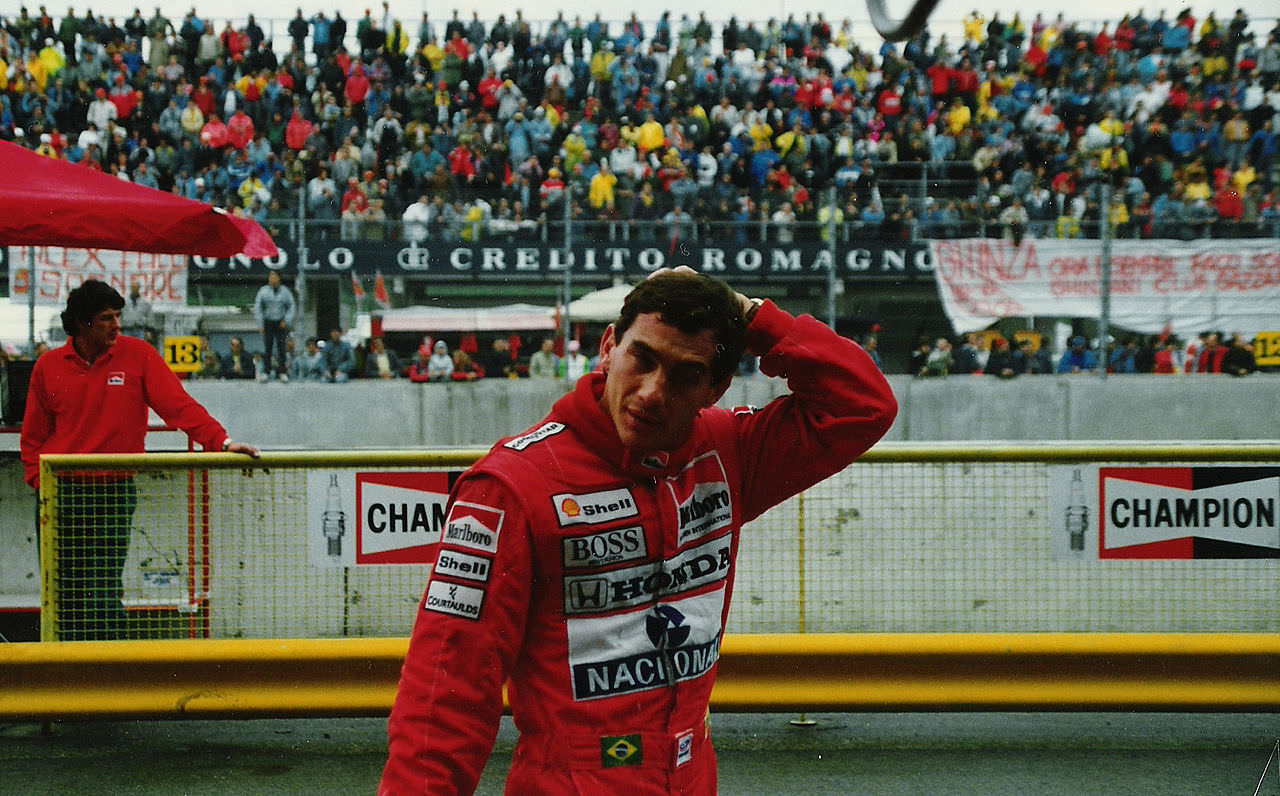 If it’s not Schumacher’s name that usually appears in this section, you can always seem to count on Senna’s. The Brazilian maestro racked up only one less win than Schumacher in his time racing, and featured in some of the Circuit de Spa-Francorchamps most memorable races, like the 1987 Belgian Grand Prix in which he battled it out with British legend Nigel Mansell. 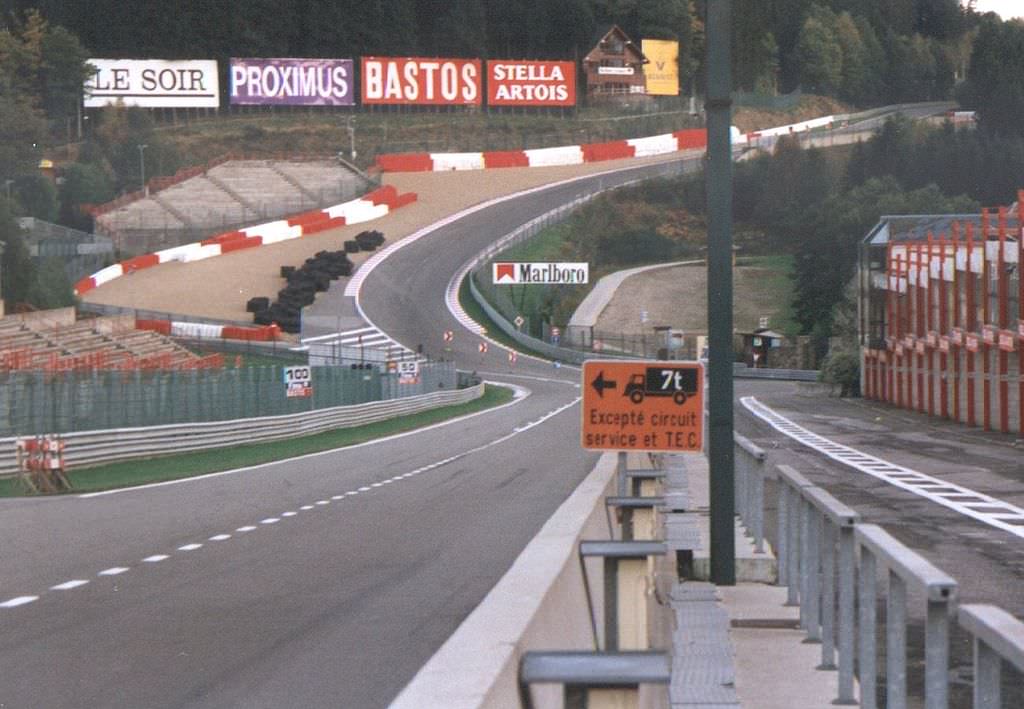 While driver Bertrand Gachot was sitting in a London jail for a fight with a local cab driver, Jordan had decided to replace him with a young promising German fellow called Michael Schumacher. The rest as they say, is history. As for the race itself, Senna managed to crawl home to victory after shaking off severe gearbox issues. He extended his lead in the championship standings to 71, a good 22 points ahead of his nearest rival Nigel Mansell in second place with 49.

Infamously known in F1 circles as the “big one”, a massive 13 car pile up overshadowed what was otherwise an impressive maiden win for Jordan by British legend Damon Hill. David Coulthard lost control of his McLaren in some particularly ferocious weather conditions, taking almost the entire field with him. It was only 5 years later that Coulthard would publicly accept fault for the accident saying: “The reality is that I lifted to let him pass me, but I lifted in heavy spray on the racing line. You should never do that. I would never do that now.”.

2004 Belgian Grand Prix: The Flying Finn versus The Red Baron

One of Michael Schumacher’s last most memorable races saw him face off against Finnish legend Mika Häkkinen, in which he was overtaken by the McLaren-Mercedes driver in an incredible move inside the final three laps. It’s rare Schumacher was ever upstaged, let alone on a track he was so dominant like the Circuit de Spa-Francorchamps. 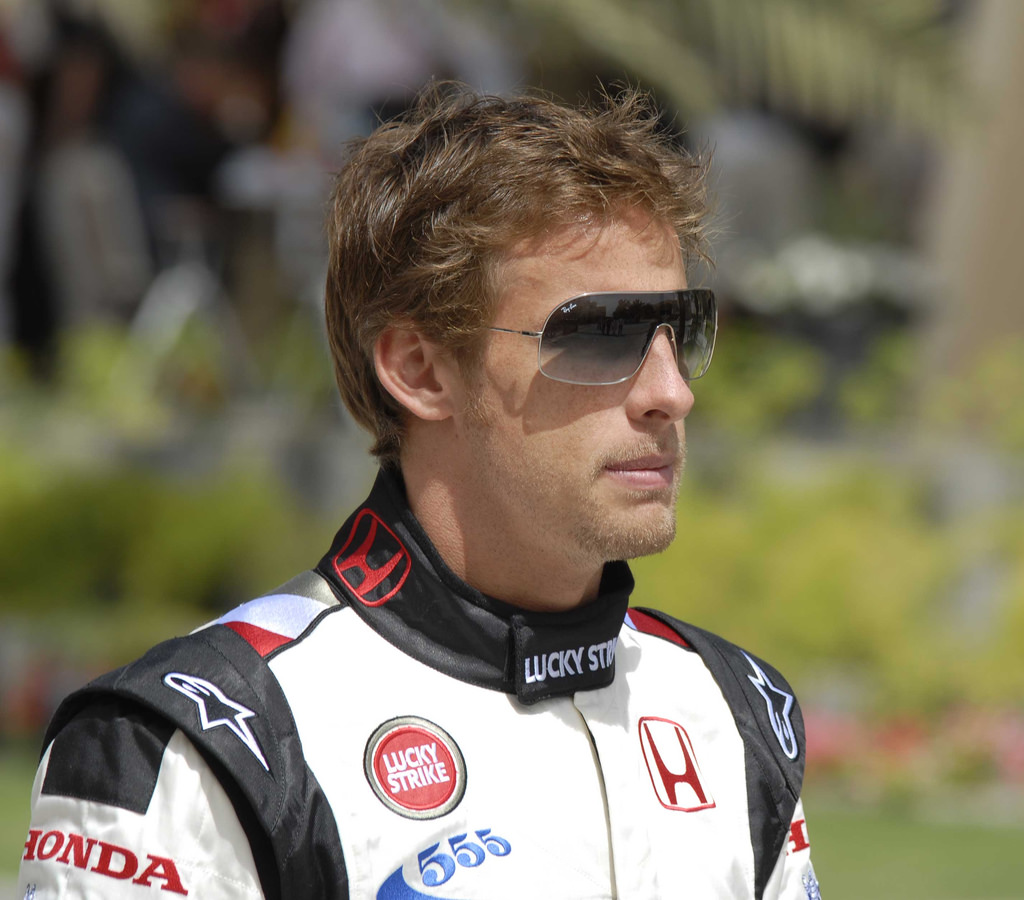 Circuit de Spa-Francorchamps and the Belgian Grand Prix: In the driver’s words.

“There are quite a lot of wasps. I don’t like them. That’s the only thing. I think the track is great.” – Max Verstappen has very specific dislikes.

“The tight and twisty circuits Ferrari seem to be closer, but I think around here this weekend Mercedes will spread their legs… “No, that’s not right! Stretch their legs!” – Daniel Ricciardo mixes up his words comically.

“Spa-Francorchamps is a circuit I have always loved since the beginning of my career, every lap in this incredibly special place remains extremely exciting and creates a gigantic grin on your face. It is really a circuit like no other.” – Jenson Button talks fondly of one of his favourite circuits.

“Even if you drive on your own it is fun.” – Sebastian Vettel

“I consider it my living room.” – Michael Schumacher. That’s one way of putting it. 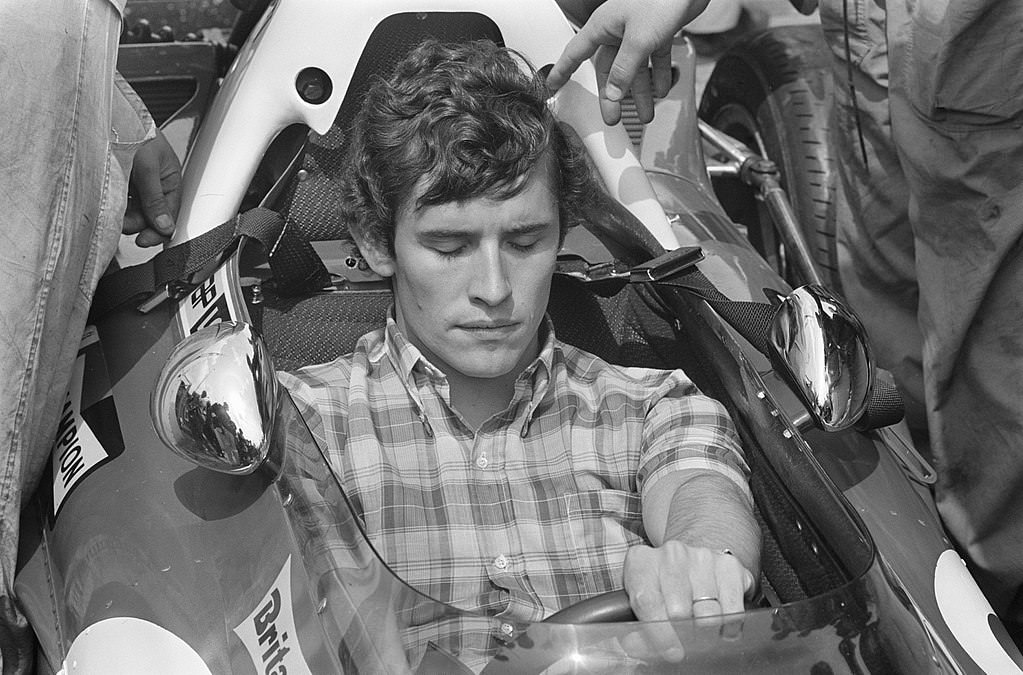 Although the track is known as Spa, it actually falls between three towns geographically. Francorchamps, Malmedy and Stavelot. Spa lays more to the northwest.

Despite being the country’s most successful driver ever, Jacky Ickx has never won at Spa. In fact, no Belgian driver has.

Because of the amount of overtaking opportunities on the Circuit de Spa-Francorchamps, qualifying matters less than other tracks. Raikkonen famously won from 10th on the grid in 2004.

The circuit is less than half its original length, yet is still the longest track in F1 by some margin at 7.004KM.

Out of current drivers, Kimi Raikkonen holds the best record at Circuit de Spa-Francorchamps with 4 wins; a record Lewis Hamilton can match this year.

We hope you’ve enjoyed the long overdue return of our track guide series, we still have a few more to go so make sure you keep us bookmarked. Is there any particular track we haven’t done you’d like to see in this series? Let us know and we’ll see what we can do about it on twitter, facebook or instagram. Don’t forget, if you’re a big fan of Spa like we are we stock an exclusive print that is pretty much a must for all big F1 fans right here. Until next time folks.

If you’re still not satisfied and are thirsting for more car content, check out how you can get 12 TOTALLY FREE wallpapers for your phone, tablet, desktop, laptop or whatever gadget you desire! Available below right now! See you next time.